New info! New look! Same mission!
Click on the images for a better look and, as always, feel free to print and distribute.
Thanks for supporting Friends of Homacho! 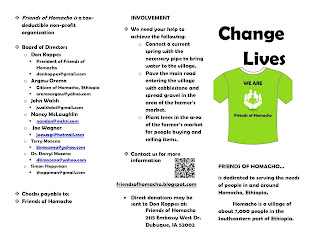 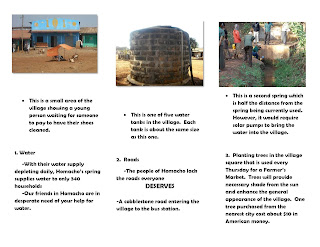 Posted by Friends of Homacho at 8:35 PM No comments:

Click on the images for a better view. Feel free to print and distribute. Let's get the word out and make more friends for Homacho! 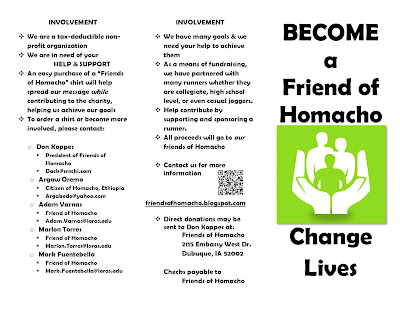 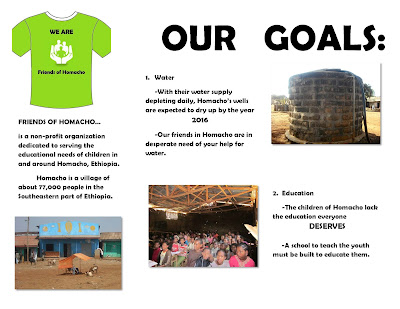 Posted by Friends of Homacho at 12:06 PM No comments:

Posted by Friends of Homacho at 11:33 AM No comments:

The Story of Friends of Homacho

Don Koppes, a retired teacher from the Dubuque Community Schools, met Argaw Oremo in March of 2009. Don was volunteering at the Presentation Lantern Center, a drop-in place for people new to the Dubuque community who want to learn English. Argaw, new to the community, came for help on his English. The two were paired together on Argaw’s first day. Quickly, Don became Argaw’s teacher, mentor, and friend. With Don’s help, Argaw improved his English, got a job at HyVee Food Store, and learned to drive a car.

At the end of March, 2011, Don returned to Ethiopia for a month. He accompanied Argaw back to the United States at the end of April. While there, Don and Argaw were able to supply money to put cement floors in a rural school with dirt floors. The money came from donations from friends and family.

Through the efforts of a local attorney, John Becker, a non-profit organization was set up in late August, 2011. The name of the non-profit is Friends of Homacho. The goal of the non-profit is to improve the educational resources and opportunities for the children of Homacho and the surrounding area. In December, 2011, Argaw and Don once again returned to Ethiopia. They helped Argaw’s wife and brother to apply for a tourist visa to the United States. Their application was denied by the United States Embassy. While there, Argaw and Don distributed 5,000 pens and 2,300 notebooks to needy children in the village and a nearby school.  The pens were gathered by the local YMCA through their pre-school program. The notebooks were purchased with money from the non-profit.
Posted by Friends of Homacho at 10:00 AM No comments:

Become a Friend of Homacho

Friends of Homacho’s mission is to improve educational opportunities for students in Homacho, Ethiopia, and the neighboring school of Geseda by providing educational materials and resources for those schools.  In addition, Friends of Homacho plans to build a preschool and kindergarten in the village of Homacho, Ethiopia, to provide a service that does not exist in the village.  The organization will provide all of the necessary resources to build and staff a school with the teachers, security guards, custodian, librarian, and administrative staff to provide a quality education for students age five (5) and six (6) in Homacho, Ethiopia.


List of Activities
- Pay to clear land of trees to build a preschool and kindergarten.
- Bring village water to the land.
- Plant shade trees on the property.
- Put a chain length fence around the designated land.
- Hire a contractor from Hossana, Ethiopia, to build the school.
- Build restrooms for girls and boys on the property.
- Buy necessary materials of stone, sand, lumber, and bags of cement to begin construction.
- Purchase playground equipment.
- Hire teachers, security guards, custodians, librarians, secretary, and principal to staff the school.
- Purchase textbooks, notebooks, and supplies for students.
- Purchase textbooks and notebooks for the existing schools in Homacho and Geseda.

Please let us know if you have any interest in becoming a part of this already successful project. Thanks so much.

Posted by Friends of Homacho at 10:54 PM No comments: